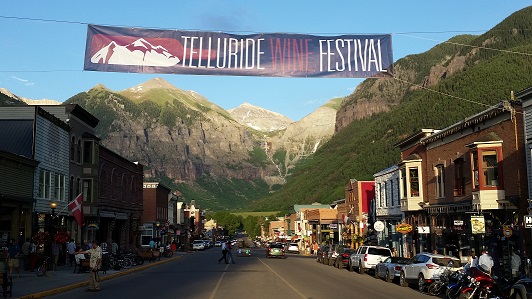 Warm welcome to the historic town of Telluride on Main Street with the famous Idarado Legacy Trail and Rocky Mountains in the background. (top/bottom) Exploring the complex flavor profiles of Coastal Pinot Noirs with tasty offerings from The Calling, Garnet Vineyards, Keller Estate, Arista Winery and Three Sticks Wines. Special thanks to Sonoma County Vintners & Petaluma Gap board member Ana Keller for being part of this sold-out seminar for 70 people with me! 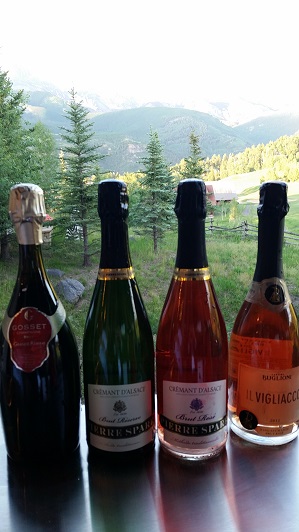 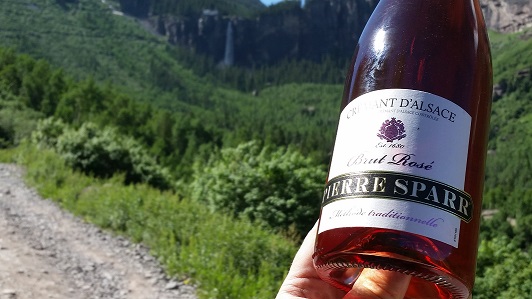 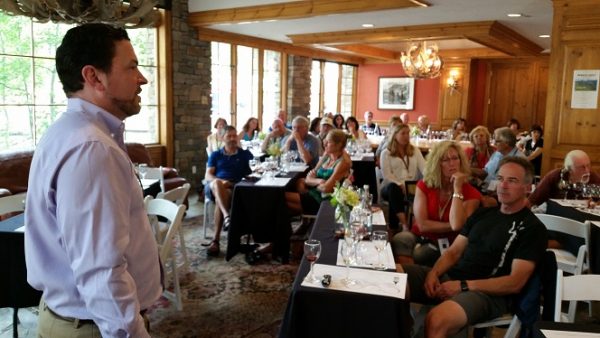 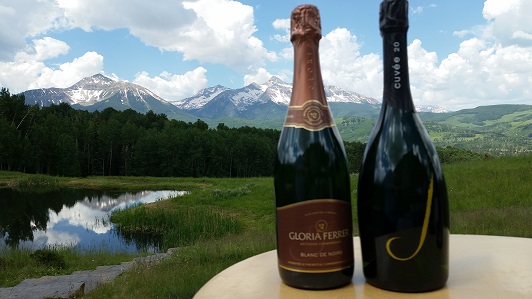 For my pairing with the exclusive Caviar Dinner at a private residence in Mountain Village, an all-star lineup of fine European bubbles from Gosset Champagne, Pierre Sparr, and Buglioni. (Left)
-Alsatian Invasion: Fun Sunday morning photo shoot with a bottle of the Pierre Sparr Cremant d’Alsace Brut Rose and the spectacular Bridal Veil Falls in the background. (top right to bottom)
-My great friend Lars Leicht of Cru Artisan and Banfi Vintners speaking to a packed house at our fun seminar and tasting, The Extraordinary Tuscan Experience.
-Sonoma County Vintners in bubbly form! Fabulous bottles of the Gloria Ferrer Blanc de Noirs and the J Wine Company Cuvee 20 featured at an amazing Saveur Pass Luncheon & Sparkling Wines to kick off the festival with the towering Mount Wilson in the background. 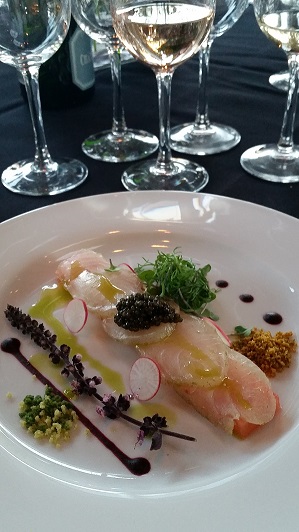 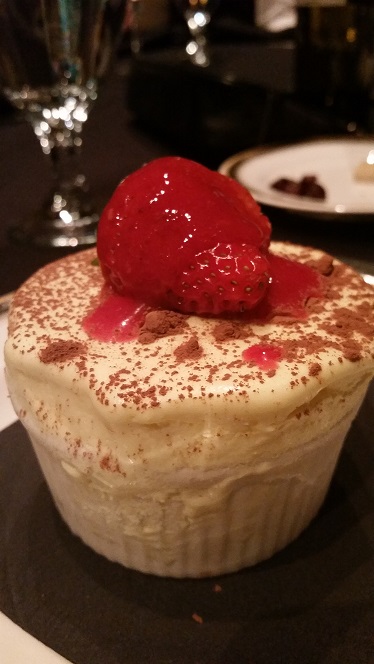 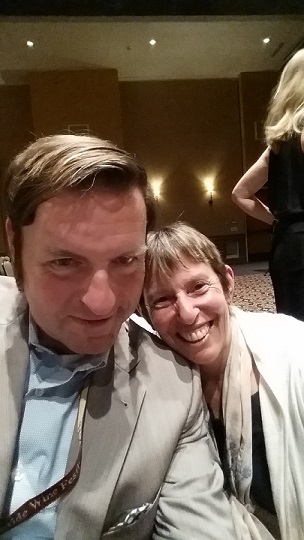 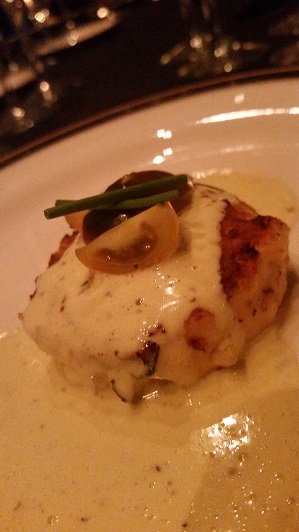 A hearty congratulations to my friend Jean and the Sonoma Valley Vintners & Growers Association for making their relationship formal!

“It has been a long-held dream of mine to be a leading voice for our wine community. The vintners of Sonoma County have many stories to tell. These stories bring to life the challenges of working with such diversity of land, dedication to sustainable grape growing for the highest quality of winemaking, while working together to care and support our agriculture and our community. This is an exciting time to be part of the Sonoma County Vintners.” — Jean Arnold Sessions.

You can read details about their joint venture HERE!

In the mix of organizing wine seminars, shipments and special guests for the Telluride Wine Festival, I also made time to record this podcast interview with Susan Viebock at Telluride Inside & Out.  Keep an eye on my social media for interesting wines, guests and activities this week at the festival!

For more about TWF and the Somm go to
Somm Of It All, Christopher Sawyer!

(Much gratitude to Adolfo & Daedalus for their technical assistance!)

For those staying local this weekend here is a nearby option to taste wines from over 30 Mendocino wineries!

Taste of Mendocino will be pouring their best wines, with numerous artisanal food producers serving up delicious bites to complement. Take a trek to SF, at the Fort Mason Center for Arts and Culture, Gallery 308, 2 Marina Blvd, Bldg A.  Tickets are $60.

Seeing as how Father’s Day represents the last day of spring and the initiation into summer this year, I thought it would be fun to run a smaller version of an article I wrote for Napa Sonoma Magazine that focused on power duos in the wine industry.  I was reminded about this cool set of articles when I was enjoying a magnificent dinner with Joel Peterson this past Saturday night commemorating the 40-year anniversary of Ravenswood Winery and when I attended the special 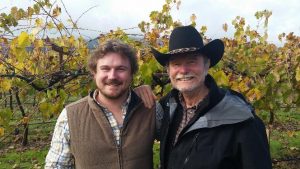 Auction Napa Valley dinner at Grgich Hills Winery to celebrate the 40-year anniversary of the Paris Tasting and the fabulous wines Mike Grgich has made after he crafted the famous Chateau Montelena 1973 Chardonnay.  I can’t wait to spend another fun Father’s Day with my wife and our boy Rupert, who happens to turn 7 on Monday (a.k.a. Summer Solstice)!  In the meantime, Happy Father’s Day 2016 to all the great followers of SawyerSomm!

As a side note: Make sure to follow me on FB, Instagram, and Twitter for all the cool seminars and events I’ll be leading at the Telluride Wine Festival beginning June 23! -CS

Joel Peterson and Morgan Twain Peterson
From the moment he started Ravenswood Winery in Sonoma County in 1976, Joel Peterson has spent the last four decades educating wine consumers, connoisseurs, retailers and sommeliers about the virtues 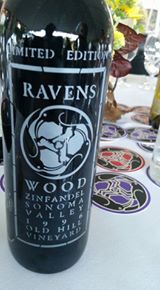 of making flavorful wines with Zinfandel, California’s official “sweetheart grape.” So it makes sense that when Joel’s son Morgan Twain Peterson was born in 1983, wine was already part of his DNA.  Inspired by early visits to the vineyards and winery with his father; Morgan made his first barrel of wine with fruit he procured from local farmer Angelo Sangiacomo at the age of three in 1986. After making multiple vintages of the Vino Bambino Pinot Noir through 2001, Morgan further honed his skills by working as a wine buyer in New York while completing undergraduate studies at Vassar and graduate school at Columbia University.  During this period, he also got to work with star sommeliers at top restaurants, including Craft, Gramercy Tavern, Aureole and Mesa Grill, who also added some of the remaining bottles of the Vino Bambino to their wine lists.  Upon returning home from finishing winemaking internships in New Zealand and France, Morgan started Bedrock Wine Co in Sonoma Valley in 2007, a boutique wine brand focused on working with old vine Zinfandel, Syrah, and other unique grape varieties.  In hindsight, Joel says Morgan’s childhood traits still remain. “He’s very similar to the same kid he was when he was five years old. Back then he liked to explore and had a special sense of determination and a little stubbornness that have ultimately paid off in the complex flavors in the wines he makes.”

Michelle Whetstone and Jamey Whetstone
The son of a southern Baptist preacher, Jamey Whetstone moved to Napa Valley in 1996 with the intent of mastering food and wine skills so he could use to start a restaurant in Charleston, North Carolina. But his plan changed when he began working with fine wines and 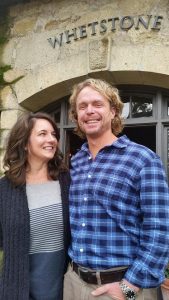 serving high profile people in the wine industry at Mustard’s in Yountville. One of his mentors was Larry Turley, who hired him away from Mustard’s to work at Turley Wine Cellars in 1998. While polishing his skills by working with gifted winemaker Ehren Jordan at the winery and a season spent at Domaine Dujac in Burgundy; he started his own Whetstone brand in 2002.  When he met his future wife Michelle, a Napa native, he left Turley in 2005 to launch a new phase of his career as a wine consultant. While Jamey made the delicious Chardonnays, Pinot Noirs and Syrahs for Whetstone and their second label called Manifesto, Michelle spent the next few years searched for a building to sell the wines retail. At the same time, both were doing parental duties to raise their four fabulous kids. In the end, what she found was the magnificent 19th Century, French-style Chateau on Atlas Peak Road designed by famous Napa Valley architect Hamden W. McIntyre, which far exceeded their greatest expectations. “For me, I just feel fortunate that I’ve been with very gracious people who have really given Michelle and I a toe-hold to establish a special winery here in the valley, but also inspired us to fantasize about retiring in our early 90s,” says Jamey, with a grin. 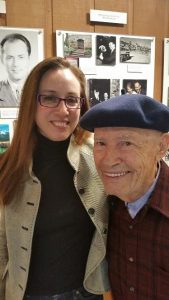 After Violet was born in 1965, Mike spent the next decade crafting some of America’s most legendary wines, including the Robert Mondavi 1969 Cabernet Sauvignon, which won the top award at the San Diego Tasting, and the Chateau Montelena 1973 Chardonnay which won over the highly-touted French wines at the Paris Tasting in 1976.
“He was always humble about his accomplishments and I didn’t really have any idea that he was such a famous winemaker,” says Violet, in retrospect. “To me, he loved what he did and he tried to pass these traits on to me as well.”
It was also during this period that Violet developed an appreciation for music. Mike brought this family tradition with him when he emigrated from Croatia in 1958. As the years passed, she learned to play the piano, accordion, flute, and specialized in the harpsichord while attending college at University of California Davis and receiving her Master of Music degree at Indiana University.
“Music was always part of our house,” says Violet, who is now the Vice President of Operations and Sales at the winery. “Most Croatians will sing at the drop of a hat in harmony. So I’ve always loved music.”

Andy Katz and Jesse Katz
When you consider that they have visited over seventy countries together, it’s hard to dispute that professional photographer Andy Katz and his son, winemaker Jesse Katz, are great travel partners.
“He’s with me whenever I can grab him,” says Andy, who began his career as a photographer of wineries and vineyards when he worked with Robert Mondavi, Domaine Chandon, Iron Horse and Jordan wineries in the 1980s and 1990s.
The colorful photos from many of these adventures over the past 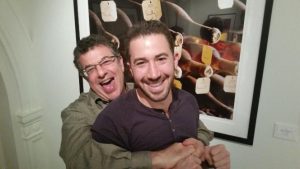 three decades can be seen in glossy table books, museums and galleries, including Andy’s personal studio on Healdsburg Plaza.
On a personal level, one of the most notable journeys was the duo’s trip to France for “The Heart of Burgundy” project, a coffee table book Andy did with Robert Parker. During their stay at Domaine Leflaive, Jesse developed a deeper understanding of the unique qualities of the French landscape, vineyards, varietals, and finished wines. The impact of the trip carried on to college, where Jesse decided to change from studying business at University of California, Santa Barbara, in order to transfer to Fresno State University, where he received his degree in Viticulture and Enology.
After developing his winemaking skills in Argentina, Patagonia, Santa Barbara County and Screaming Eagle in Napa Valley; Jesse became one of the youngest head winemakers when he was hired at Lancaster Winery in Alexander Valley at the ripe age of 25 years old.
On the side, the Katz family makes two distinctive wines in Sonoma County. The first is a decadent Malbec called Devil Proof. The second is a complex single vineyard Cabernet Sauvignon called Aperture. “Like the tiny details in dad’s photos, we put our heart and soul into each wine we make,” says Jesse.

Take the shortcut to Tuscany, via Telluride Wine Festival!  Join me and Lars Leicht from Banfi to taste through an amazing samplings of 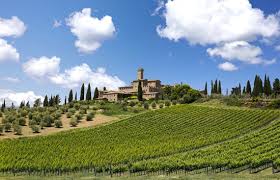 Vermentino and Bolgheri Rosso from the coast; a new single vineyard Chianti, and bringing it all together with the newly released 2011 Brunellos. Fantastico! 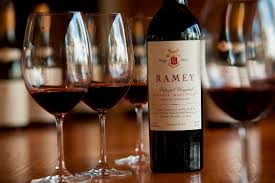 Another great seminar and guest at Telluride Wine Festival!  Jeff Boyer of Ramey Wines, to discuss and taste through a selection of their wines.

The Taste of Two Valleys will encompass the wines of David Ramey, whom has crafted world-class Chardonnay and Syrah with premium grapes grown in Russian River Valley and the Sonoma Coast appellations in Sonoma County for two decades.  Join us Friday, June 24 from 3:30-4:30pm!

Here is a reason to finally get those Telluride Wine Festival tickets! Join me and winemaker Ehren Jordan for the stimulating seminar Que Syrah Shiraz on Friday June 24, 11am to noon.

We will talk you through these cool climate and warm climate Syrahs from California, Washington State and Australia. Each exhibiting unique profiles and unexpected depth:

My friend, poet Dean Rader, recently published this fun wine-pairing piece in honor of the NBA Finals. A tip of the hat to this charming analysis of Basketball culture, and justification that it is truly a sport best suited for wine!

Read it in the Huffington Post:
The NBA Finals: Time to Get Your Wine On