At public speaking events, I often say that I do just about everything in the wine industry except make wine. But that changed recently when I had the amazing opportunity to be one of the eight national sommeliers chosen to be part of the team that crafted the newest 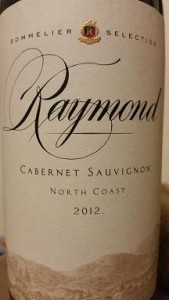 As it worked out, Marc Irving from the Fairmont Sonoma Mission Inn and I made the winning blend of 80% Cabernet Sauvignon, 15% Merlot and 5% Petit Verdot that was used to make the 5,000 cases of the 2012 vintage that were just released in November.

The story of the experience was recently published in the October-November issue of Sommelier Journal. And below is is more information about this fabulous wine and the exception winemaking experience provided by Raymond Vineyards. Enjoy the Sommelier Series Cabernet Sauvignon and don’t forget to look for the wine and other new releases from Raymond Vineyard at fine restaurants and retail shops near you!