With Halloween now descending upon us, there are so many merry people dressed as ghosts, ghouls, witches and skeletons to celebrate this sacred holiday. But for some, it’s a real-life occurrence at different times of the year. One of those people is gifted winemaker Pam Starr of Crocker & Starr Winery in St. Helena.

Starr didn’t believe in spirits until 2004. But that changed when she purchased a house in Browns Valley west of Napa. In addition to having a lovely hillside view of the valley, the house also came with a set of spirits who lived near the window in her bedroom.

“They would rattle the window from the inside. God, they were loud!” says Starr during our interactive discussion about ghosts and spirits at Crocker & Starr in mid-October.

After having many encounters with the spirits, Starr discovered her friend was a practicing witch. And after a deep discussion and a few bottles of wine, it was determined that the best method to get rid of the spirits was to use the traditional method of burning sage. The only catch was that she could only invite friends with personalities strong enough to persuade the uninvited guests to return to the spirit world.

Once ready on that fateful night of 2006, the team Starr assembled included herself, the witch, and another friend that couldn’t wait to help the cause. Here’s a summary of the de-ghosting process:

Step 1: Light the sage on fire then blow it out to allow smoke to fill the house.
Step 2: Go to all the corners of the house and start telling the spirits what you want them to do.
Step 3: Use friendly lines to get your point across. The quotes used included: “This is not your place any longer.” “Go in peace.” “Go be with your others.” “You need to go back to the place where you belong.” “It’s time for you to return to your friends in the spirit world.”
Step 4: Cross your fingers and hope for success!

As it turned out, the ritual worked. As a result, Starr and her husband never had another encounter before they sold the house earlier this year. 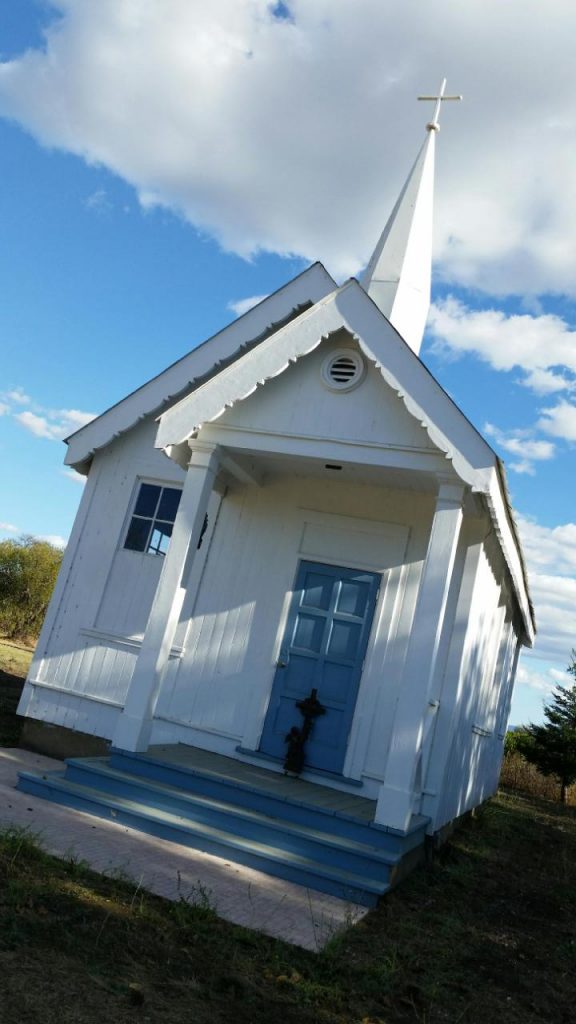 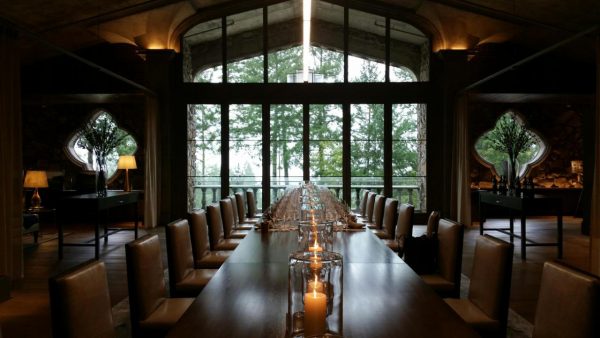 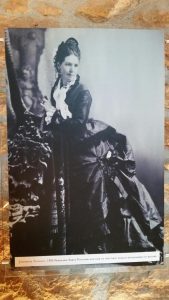 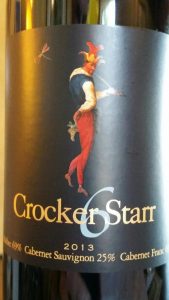 [Photos:  Winemaker Pam Starr of Crocker & Starr says she had spirited encounter inside the old chapel that found a new home on the winery’s estate in St. Helena; The beautiful new Lokoya tasting room on Spring Mountain west of St. Helena; At Freemark Abbey north of St. Helena, there has been a sighting of a ghost that is believed to be Josephine Tychson, the woman winemaker who founded the 16th bonded winery in Napa Valley on the property in 1886; A look at the Crocker & Star wine label.]

That’s the good news. But Starr has also had numerous encounters with spirits at the ancient winery and historic grounds that she and her business partner Charlie Crocker brought back to life when they started the winery in 1997.

According to Starr, every spirit is different. For instance, at the Casali—the old brandy house on the estate which was originally developed by the Dowdell family in the 1890s—the spirits are quite friendly.

“I really believe that the spirit there really had fun with brandy,” she says, as she points towards a classic photo of the people who worked on the property in 1890s. “It’s just a really good ghost. But it definitely has the ability to say when the party is over.”

As an example, Starr told a story about a party that was going sour in the Casali. “Until that point it was a fun gathering, but I think the ghost was done with the crowd. It was at that point that a man started drinking more wine and got in another man’s face. Nothing happened, but everyone decided to leave immediately thereafter. It was the spirit’s version of crowd control,” say Starr, with a chuckle.

On the darker side, another spirit lives in the old chapel on the estate property purchased by the Crocker family in the 1970s.

“Somebody move that cherub and cross closer to the door,” quipped Starr, as we approached the petite white chapel with blue trim. “That spirit in there is not my friend.”

The history behind the building is intriguing. Built with local redwood in 1910, the original home of this quaint chapel was next to Grace Cathedral in San Francisco. As a native of the city and with a long family history with the Catholic community, Charlie and his siblings were approached to see if they were interested in providing a new home for this registered chapel. As a result, Charlie was able to relocate building on the southern edge of the estate in the 1990s.

Starr’s haunting experience occurred when she guided a tour for a small group of visitors through the interior of the building a few years ago. It was a very cold morning. So after walking past the four pews on her way towards the pulpit, she vividly remembers seeing beautiful sunlight streaming in through the window facing Howell Mountain to the east.

“I was wearing a long sleeve black sweater and the sunbeams provided a little extra warmth. Then, all of a sudden, I felt a strange vibration on my arm. Upon rolling up the sleeve, a giant black bumblebee came flying out,” she said in a coarse voice.

“There was no way a bumble bee would be buzzing around on such a cold day. Let alone, suddenly appearing in the arm of my sweater. It freaked me out.”

Although Pam’s wedding was held in front of the chapel, she’s never been back inside. “I don’t know what that spirit was thinking. But I’m not going in that building ever again. Obviously I’m still offended by my experience.”

Pam is not alone with ghost stories in Napa Valley.

Another person with some insight is Ted Edwards of Freemark Abbey Winery. Located on the northern side of St. Helena, the historic winery recently went through a marvelous restoration process. In addition to transforming the interior of the old stone building into an expansive tasting room and wine library; the building is also the new home to Two Birds, One Stone, one of the hippest new restaurants in Napa Valley, featuring the tasty delights of star chefs Sang Yoon and Douglas Keane.

Recently, I sat down with Edwards and tasted through a sampling of new releases and library wines while we talked about the intriguing ghost encounters on the property.

As the first woman winemaker in Napa Valley, the original owner Josephine Tychson and her husband moved from San Francisco to St. Helena in the 1880s. After a hard fight with tuberculosis, he passed away. But alas, Josephine moved on to start the 16th bonded winery in Napa Valley in 1886.

The original wines were made in barn structures on the property. In addition to having vineyards around where the current winery stands, there were more also planted on the hillside across the road near the house where Josephine lived until she sold the winery to Italian immigrant Antoine Forni in the late 1890s.

After renamed the winery Lombarda Cellars after the small region of Italy where he grew up, Forni built the original stone building on the property. The construction was started in 1898 and finished in 1906, the same year as the famous San Francisco earthquake.

There are no records of who owned the property after Forni closed the winery at the beginning of prohibition. But Edwards says it’s been suggested that there was “activity” on the property when it was a ghost winery.

In 1939, Charles Freeman, Mark Foster and Abbey Ahern purchased the property and brought it back to life. They renamed it Freemark Abbey, which is a shortened version of their three names scrunched together.

Since joining the team in 1980, Edwards has vivid memories of suspicious creaks and other noises that sounded like footsteps and voices when he would shut off the lights in the cellar late at night. But the most noteworthy occurrence happened when an intern saw a woman walking across the catwalk in the cellar. “It spooked her,” says Edwards.

At the magnificent new Lokoya site on Spring Mountain, winemaker Chris Carpenter said he’s convinced that one of the previous owners still resides in the caves below where the gorgeous new tasting room is located.

Carpenter and vineyard manager Mariano Navarro have also had similar experiences at the ancient stone winery on the historic La Jota Vineyard property on Howell Mountain. The structure was completed in 1898 by Frederick Hess, who made wine on the property until prohibition. But until William and Joan Smith purchased the property in 1974, it too became a ghost winery.

“These old buildings have stories to tell,” says Carpenter, who also noted that more ghost sightings are still pending.

With these thoughts in mind, mark your calendar to be part of Flavor Napa Valley on March 25, 2017. That is the day that Pam Starr, Ted Edwards, Chris Carpenter, myself, and other special guests will rekindle the stories about ghosts and spirits while tasting through a stellar lineup of wines from each of these haunted sites at the special “Ghost Wineries of Napa Valley” at the Rudd Center at the Culinary Institute of America. For more information, visit www.flavornapavalley.com.

For your hedonistic pleasures for the fall and winter months of 2016, here are three new spirited red wine releases from Napa Valley that I recently reviewed.

Freemark Abbey 2013 Merlot, Napa Valley
Although some people believe Merlot is dead, Freemark Abbey winemaker Ted Edwards is the first to say that the noble grape variety is now stronger than ever. The latest example is the Freemark Abbey 2013 Napa Valley Merlot, a spirited blend made primarily with fruit from the Keyes Vineyard on Howell Mountain, Stagecoach Vineyard on Atlas Peak, and the Dos Rios and Cardinale vineyards in Yountville. Soft and elegant, this lively wine is bursting at the seams with expressive flavors of dark cherry, ripe berries, milk chocolate, wild herbs, chewy tannins, and deep, rich finish. $34/btl. www.freemarkabbey.com.

Crocker & Starr 2013 Casali 6 Red Wine, St. Helena
As an alternative to the latest offerings from witch’s caldron and eye of newt, try winemaker Pam Starr’s newest offering of the Casali series. In Italian, casali means “farmhouse.” This unique proprietary blend of Malbec and smaller portions of Cabernet Sauvignon and Cabernet Franc was inspired by Pam’s visit to the Mendoza region of Argentina in 2012. Luxurious flavors of ripe plum, blueberry, lavender, vanilla, licorice, and cardamom are caressed with a smooth texture, bright acidity, and a long finish. $80/btl. www.crockerstarr.com.

Lokoya 2013 Cabernet Sauvignon, Mt. Veeder
From the Loyoka Appellations Collection from rugged vineyards at elevations of 1,100 to 2,500 feet above the valley. This fantastic new release features deep and dense flavors of briary blackberry, dark cherry, mint, citrus peel, allspice and chocolate truffle supported with chewy tannins, firm structure, and long graceful finish as it opens up in the glass. $375/btl. www.lokoya.com.

In the meantime, on behalf of SawyerSawyer.com, my staff,
and the Sawyer family, Happy Halloween!