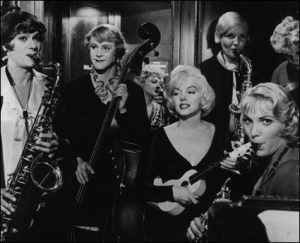 An aptly named film for this week of record breaking temperatures!  Join me at the St. Francis Outdoor Film Festival on Thursday July 20th at 7pm, for the classic comedy Some Like It Hot starring Jack Lemon, Tony Curtis and, of course, Marilyn Monroe.  Come early to enjoy the pre-show concert by the Carlos Herrera Band.