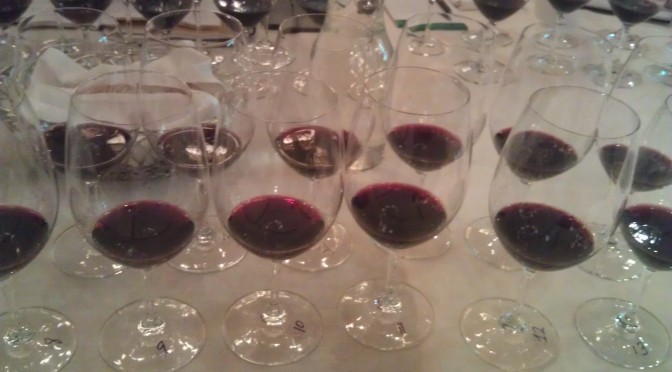 From a sommelier’s perspective, I think what made this year’s presentation at the annual “A Day in the Dust” Tasting hosted at the legendary Ingelnook Winery by the Rutherford Dust Society last week so special was the spirit of the growers connected to the wineries and the winemakers, particularly in regards to the teamwork required to make it through the 2011 vintage and the horrid eight days of heavy rain in early October.

With that being said, most of the wines are not typical in terms of Rutherford Dust style. For starters, 2011 was a lighter year than previous vintages. But for what was lost in ripe fruit flavors and the natural mocha or chocolate notes typically associated with the term “Rutherford Dust” was made up for with more emphasis on high levels of acidity and tannin management. But, then again, these types of conditions are common for winemakers in Bordeaux to deal with multiple times in a decade.

At Quintessa Winery, for instance, winemaker Charles Thomas said 95% of the fruit was picked after the second rain and the use of optical sorting tables was critical to making sure he only worked with clean fruit. “There was a lot of talk among friends and other winemakers. To us, every day was a new harvest.”

In the end, the vintage was better than expected. As longtime winemaker Ted Edwards of Freemark Abbey put it in baseball terms, “I think we got thrown a curve ball and we hit it out of the park.”

Due to these factors, the bright red fruit flavors in the wines have drifted way away from the conventional pairings with beef, lamb and blue cheese; but instead lend themselves more towards working with more creative cuisine. For instance, I would have no problem pairing many of the wines with seared Ahi tuna coated on the outside with ground espresso beans and the plate decorated with drizzles of raspberry coolie. Other options would be to serve a chicken dish with savory spices, roasted pork with spicy plum sauce, or medium bodied cheeses like Laura Chenel’s new Truffle Chevre that can handle the high level of acidity in these young vibrant wines. In essence, they are wines that are drinkable now and even more intriguing when paired with a wider range of cuisine.

I would compare the 2011 vintage to a rare album. It reminds me of The In Sound From Way Out, the Beastie Boys instrumental EP that I originally purchased in Paris in the late 1999. Today, the album still doesn’t sound like Licensed to Ill, Paul’s Boutique or the other hit albums in the band’s portfolio. Instead, it has its own quirky personality much like the wines from the 2011 vintage that are a slight departure from what sommeliers, wine buyers and consumers have come to expect from the Rutherford AVA and the mythical Rutherford Dust from the region.

Prices of these wines varied from $45 to $125 per bottle. See below for more details on these wines and other top picks. Also, look for clips of my views on the vintage as well as notes from my friend and fellow sommelier Jorge Tinoco in Randy Caparoso’s upcoming article in The SOMM Journal. For more information about the producers of the Rutherford AVA, visit www.rutherforddust.org.